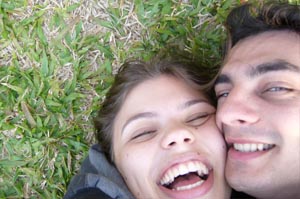 Occupation: Fabiana is a college professor and Cesario is a head-waiter

My name is Fabiana and I'm proud of telling you my story!

October 2011: I had been invited to join IQ Elite via an invitation to take a personality test. I took this test and then checked my matches. I contacted the first five users I was compatible with, according to my personality profile. Since I didn't have a Premium membership, I couldn't send a message so I decided to send winks. Cesario was one of them and he replied right away by sending me a message. We enjoyed chatting and agreed that we felt it was still too soon to meet in real life so we preferred to keep talking online.

November 2011: We really got to know each other during this month! We were sending at least a message every day. Cesario is from Sao Paulo but works in Rio de Janeiro, which is 5 hours driving between the two!

December 2011: Since he was visiting family in Sao Paulo for Christmas, we took this opportunity to finally meet. For our first date we went to see a movie and have dinner together. This was great, and actually very funny because it seemed like we had known each other for so long, whereas it was actually the first time we met! We then met up again two days after and this is when we first kissed - and so naturally! When Cesario told me he had to get back to Rio we took a tough but non regrettable decision to keep the relationship long-distance.

March 2012: Three months later, I finally went to Rio to visit Cesario! Since I was there for a week, I took the opportunity to have two job interviews in two of the most well-known universities in Rio. But I didn't tell Cesario about that, I wanted it to be a surprise!

One week later, I received a call and I was accepted for one of the jobs, great news! I called Cesario right away and I surely took the best decision of my life: moving to Rio de Janeiro to live with my love! It's been so great since then; we are now very happy and often talking about our future! Thank you IQ Elite Team, your service is great!