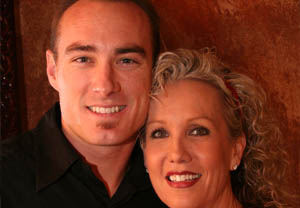 Occupation: Ashley is a lawyer and Max is a medical doctor

So here is the story of how my boyfriend and I met. I really didn't think I could start a meaningful relationship on a dating website, especially after my ex-boyfriend left me and my 5-year-old daughter...

But you know what they say: nothing ventured, nothing gained! Therefore - encouraged by a friend of mine - I decided to sign up to IQ Elite and immediately started looking at profiles that the website was suggesting.

I went on dates with three different men (not at the same time though, haha). They were nice and kind to me, but I didn't feel that I could have had a serious relationship with any one of them. But that was before I met Max! He's actually the one who first sent me a message, but what's interesting is that a few weeks later, he told me that he never would have made the first move in real life, because of his shyness.

So for about a month, we sent messages to one another. I finally asked him if he wanted to meet up. He accepted, and since we had a common interest of football, we decided to see an Arsenal-Chelsea game. Even though we weren't supporting the same teams, the game was great, the atmosphere was fantastic! After the game, we went to a French restaurant, where we had a chance to learn about one another. Just like me, he was disappointed by a previous relationship, so we shared our feelings about our online dating experiences. It turned out we were more similar than we initially thought!

I can't really say that it was "love at first sight" with Max, since I was really nervous and not into the idea of starting to date again. But in retrospect, the feelings I had for Max were really separate from that; the day after we first met, he called me and we talked for three hours! That's when I realized how much I liked him, and that what I was experiencing were not just "friendly" feelings. We went on several dates after the football game, and the first time we kissed came very naturally, as if we had planned everything from the beginning!

So we're now living together! My daughter loves Max, and we're actually thinking of growing our family! Max and I really want to thank IQ Elite for making this possible. The match-making process works great, and might just help you find someone more similar to you than you thought possible!