What is Intelligence and What is IQ

Definition of Intelligence and IQ

Definition of Intelligence: Intelligence can be defined as a property of the mind that encompasses many related abilities such as the capacities to reason, to plan, to solve problems, to think abstractly, to comprehend ideas, to use language, and to learn.

Definition of IQ: The IQ is a measurement of intelligence. IQ presumes that there are differences in intelligence among people of a population and expresses, with one score, how intelligent a person is in relation to the rest of the population.

Value of Intelligence and Value of IQ Tests

Many contend that intelligence does not relate to cognitive abilities, and many criticize IQ tests for not measuring intelligence.

This criticism is not completely unfounded. It is true that intelligence is not clearly defined nor is it easily measured. By contrast, other human dimensions (height, weight, muscular strength) are self-defining and can be measured objectively.

However, we can make certain indisputable statements about IQ and intelligence as stated in the book, The Bell Curve:

IQ as Predictor of Success

The criticism against IQ tests can be countered by the successful use of IQ as a predictor of success in various domains.

Although IQ is not a perfect predictor of academic or work success, even critics recognize that there is a strong correlation betweenIQ and success.

The IQ test was originally designed as a predictor of the academic success of school children. Only later in the 20th century was its use extended to the work place.

While it is true that there are many other factors that determine success at school, IQ repeatedly is shown to have a high correlation with academic success.

The IQ can predict success at work. Measuring the job candidates' IQ and considering IQ in the recruitment decision is a useful tool. However, the use of IQ test in the work setting is even more controversial than in the academic setting.

Fewer than 50% of employers worldwide use IQ tests as a means of evaluating job candidates. There is a wide variation among countries. These are some examples:

Scientific research suggests that while an IQ test is not a perfect predictor of the future success of a job applicant and while many other factors are relevant to work success, IQ should be considered. This is because the IQ of a candidate correlates highly with future success at work. Recently, researchers compared the effectiveness of various methods of selecting employees: IQ tests, unstructured interviews, personality tests and biographical questionnaire. The result was unambiguous: the single best predictor of work success is IQ.

According to Schmidt and Hunter, "for hiring employees without previous experience in the job, the most valid predictor of future performance is intelligence." IQ test scores predict performance ratings in all occupations. That said, for highly qualified activities (research, management) low IQ scores are more likely to be a barrier to adequate performance, whereas for minimally-skilled activities, athletic strength (manual strength, speed, stamina, coordination) is more likely to influence performance.

Support for the usefulness of the IQ comes also from Justin Menkes in his article in the Harvard Business Review titled “Hiring for Executive Intelligence”. Menkes states: "Despite the very real shortcomings, IQ tests are still a better predictor of managerial success than any other assessment tool. The business world's reluctance to use intelligence testing of any kind has robbed companies of a powerful tool for evaluating candidates for employment or promotion.”

As the IQ predictor is a good correlator to success at work, it also correlates with income and wealth. In essence, the higher your IQ, the more likely you are to have a higher income, accumulate more wealth and attain a greater social status. 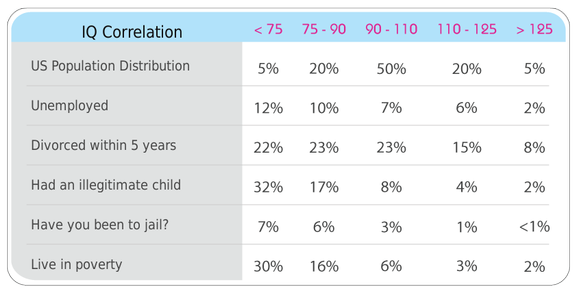 The table shows some astonishing facts about the relation of IQ to various life experiences:

What do we know about Intelligence

There are many definitions of intelligence.

The Meaning and Measurement of Intelligence

Source and Stability of Within-Group Differences

The Smart Fraction Theory and the Wealth of Nations

Mensa was founded in England in 1946 by Roland Berrill, a barrister, and Dr. Lance Ware, a scientist and lawyer. They had the idea of forming a society for bright people, the only qualification for membership of which was a high IQ. The original aims were to create a society for highly intelligent people that is non-political and free from all racial or religious distinctions.

Mensa has three stated purposes: to identify and foster human intelligence for the benefit of humanity, to encourage research in the nature, characteristics and uses of intelligence, and to promote stimulating intellectual and social opportunities for its members.

How many members does Mensa have?

Today there are some 100,000 Mensans in 100 countries throughout the world. This compares to 3 mln members worldwide of the online high IQ society IQ Elite.

What does "Mensa" mean?

How do I qualify for Mensa?

Membership in Mensa is open to persons who have attained a score within the upper two percent of the general population on an approved intelligence test that has been properly administered and supervised. The IQ requirement is thus higher than for the online high IQ society IQ Elite where only an IQ in the top 10% is required.